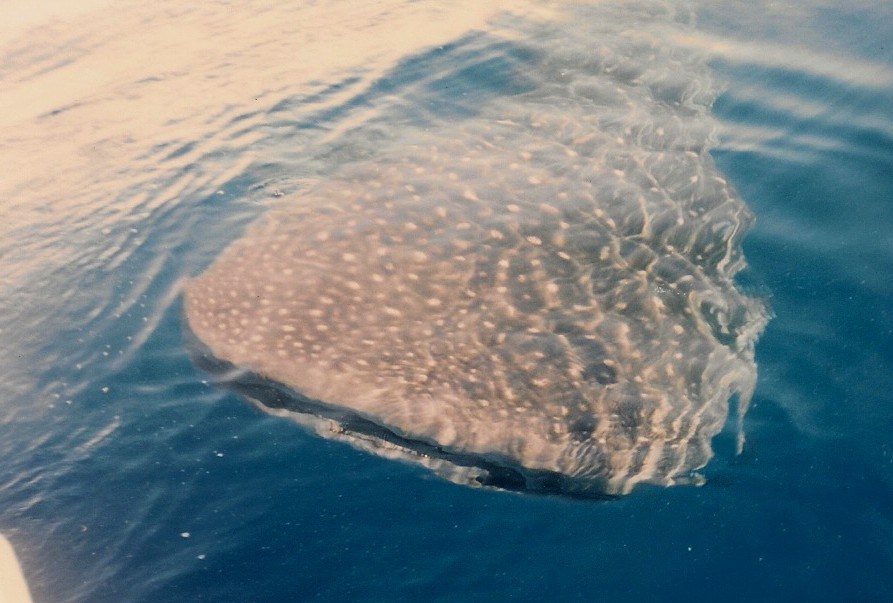 While fishing the edge of the reef with friends and family I had quite an interesting situation occur. We were easing along in about 120 feet of water looking to do some fishing. It was a perfect morning. The winds were light, there wasn’t a cloud in the sky and the water was a perfect aqua blue color. There was a steady current and it was obvious from the conditions that the Gulf Stream was in close to the edge.

I was looking at the depth finder trying to find some holding mutton snapper to drop some deep jigs (heavy lead feathers) with fresh ballyhoo plugs down to. Spring is a good time to target mutton snapper.  I love fishing for them because they pull hard, they are gorgeous fish to boat and photograph, and they make for some tasty dinner.

Suddenly my Garmin depth finder showed that we were in 2 feet of water. It wasn’t just a momentarily blip, but it actually showed hard, steady bottom two feet underneath us. I get as frustrated as anyone when my electronics (especially new and well-maintained equipment) act up. I gave it the old fix-all side slap. Nothing changed. I turned it off and then on again. The screen came up and I waited for it to begin scrolling. There it was  holding steady at two feet again.  Now I was simply frustrated. I knew for a fact that we were  in over a hundred feet of water!

I exhaled loudly, stepped away from the screen and gazed overboard. Suddenly I saw that we were about to run aground! “What the hell is going on?” I exclaimed. “How can we be so shallow?” I asked to no one in particular. Everyone onboard peered down to see what on earth I could possibly be talking about.

Suddenly the “ground” started easing out from under us and it was covered in spots! It was a thirty-foot whale shark! It was an amazing sight to behold. It was longer and wider than the boat, and breathtakingly beautiful. It came up next to us, stuck its face up out the water and just hovered there.

My sister grabbed my camera and started snapping pictures while we watched this amazing creature to see what it was going to do next. She asked, “Are those sharks down there under it?” My friend Gainey, who is an experienced angler, grabbed a mask and stuck his head over the side into the water to take a closer look at what my sister had seen.

“Those are cobia!”, he exclaimed.  Cobia are a highly sought after sport fish. They do indeed look like sharks. “There are two of them. They must go sixty or seventy pounds!” he exclaimed as he shook the water out of his ears and threw down the mask. He began busying himself with rigging a rod that could handle those massive fish.

Meanwhile the whale shark had come behind my boat and began to scratch its head and back on the skeg and propeller of my outboard engine (I had taken the boat out of gear). It was rubbing itself so thoroughly that my vessel was lifting up in the water and side-to-side a bit.  At this point I was totally enamored by this amazing creature and flabbergasted by it’s behavior.

I was in the back of the boat as close to the whale shark as I could get. I reached down and began to pet and scratch the big fish on its head. It seemed to be as intrigued by me as I was by it. It abandoned my engine and popped its head up behind the boat like a pet dog seeking its master’s affection. It stared right into my eyes as I pet and scratched its head. My sister took my camera, which was waterproof, stuck it in the water and began trying to take underwater shots of our new friend.

Gainey began pitching a deep jig with a whole fresh ballyhoo attached to the swimming cobia.  I love cobia. They are another one of my favorite fish to catch. I have to admit that I was much more interested in the whale shark and enjoying our ‘moment’ with it than in fishing in that instance. The cobia pursued the jig halfheartedly and one even nipped the back of the ballyhoo, but it was pretty clear that they were more concerned with following their host whale shark than eating our lure and bait.

Finally the whale shark began flicking its tail and started easing away from us. We followed for a bit while Gainey took a few more casts at the cobia. The beautiful creature began lazily swimming down into the depths. Deeper and deeper it dropped. It showed clearly on my ‘functioning’ depth finder (We were in 130 feet of water) for a while until finally it swam out of range.

It was an amazing experience that none of us are ever going to forget. We lamented not hooking the cobia of course, but we were far from disappointed. It was another great day of many. Another “fix” for our mutual addictions to the ocean, fishing and getting out on the water. 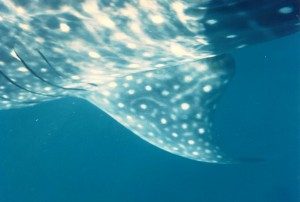 Christa Sedney
19:30 18 Mar 20
My 13 yr old son and I spent two days in the backcountry with Captain Dave Perkins (March 15th and... 17th, 2020). I can tell you, we will definitely plan a trip with him again! We had an amazing time! He was a very skilled guide, and pulled several tricks out of his bag to get us on the fish! In addition to landing several sea trout, snook and redfish, were fortunate enough to catch and release a lemon shark, spinner shark and sawfish!! They were beasts!!! This was an incredibly exhilarating experience and I couldn’t recommend Captain Dave more! So make the right choice and book yourself an excursion with him today!!! You won’t regret it!!read more

Eddie Sorrell
15:07 14 Mar 20
2 great days of fishing with Captain Dave March 3rd &5th Dave went out of his way to put me on a... back country game fish bite and it paid off 1st day we caught several reds/trout and snook second day out we got on a good snook/red fish bite and I landed 2 nice Snook.From beginner to experienced fisherman Dave is the man that gets it done we were blessed to be out there getting after it those 2 days I look forward to booking trips next yearread more

Adam Gray
20:26 03 Mar 20
Our trip with another captain was cancelled so I reached out to Captain Dave to see if he was... available. He was able to get us out and put us on the fish in less than ideal conditions! We caught A TON of snook, trout, and jack. We even caught a jewfish. We had a blast and will definitely be booking another trip with him in the future.read more

Danny Ritter
01:47 22 Feb 20
I have chartered Captain Dave several times and it has always been a fantastic experience! Dave... goes above and beyond expectations to provide the best fishing trip in the Keys that one can have. He is extremely knowledgeable, teaches you things, and assists when needed but lets you get the fishing done yourself too. Beyond that, Captain Dave is so fun and personable, and that is what really separates him from the competition. He’ll make you laugh, tell stories, listen to you, and really roll out the red carpet for his guests. You are guaranteed to have the best fishing charter experience in all of the Keys with Captain Dave!read more

Robin Berman
21:46 07 Feb 20
I recently fished with Captain Dave and I must say it was an incredible experience! I do not... typically fish the backwater country, but after spending the day on the water with Dave, I fell in love with it. We caught numerous Snook, Redfish, Trout, etc. He certainly put us on the fish! Thank you Dave for an awesome day!read more

Wally Ermi
16:37 07 Feb 20
Dave is by far the best Captain out there. His personality coupled with the knowledge he has about... the water made my trip truly memorable. If your looking to see all kinda of cool landscape, fish with a great Captain and most of all catch so many fish you will loose count, book a trip with Dave!read more

Joe Deily
15:09 16 Nov 19
This was my first charter with Captain Dave. Unreal experience. My wife and I were lucky to have... calm waters in early November. Less than 90 minutes into the trip Captain Dave helped us catch our first Permit. He shared his knowledge of sight fishing, and made the trip a unique experience we will never forget.. What a beautiful fish! Clearly, he had a great understanding of the local area and where to get fish. In the latter part of the trip we caught redfish, snapper, jacks, and snook. He is easy-going, and made the experience extremely memorable, and tailored it to the conditions and our capabilities. We are novices, and we feel like we hit a hole in one.read more

Jay Forstner
23:07 05 Apr 19
Captain Dave is everything you could want in a fishing guide. He works hard. He's knowledgeable. He... loves what he does. I had an all-day back country trip with Dave April 2. Minutes from the dock, he had us on fish, and he kept us on fish for the next eight hours. He knew the exact spot to target specific species, and if one spot wasn't producing, we moved on to the next one. Jacks, trout, snook, redfish, even a couple of unexpected monster sharks. He respected the fish and released them as quickly and humanely as possible. Just as important, he's a cool guy to be around. People sometimes forget that when you book a guide, you're going to spend the whole day in a boat with that person, so it's important that he or she is fun to be with. Dave is laid back, funny, interesting, and a good listener who seems genuinely interested in getting to know his clients a little bit during the day. He offered tips and advice on fishing techniques, but never made me feel like I was a complete novice, even though I was. All in all, just a great day with a fun, friendly guy who really knows his stuff. I recommend him very highly.read more

Dave C
21:43 06 Feb 19
We had an awesome back country trip with capt Dave. I highly recommend Dave. He put us on the fish... and we caught more than I could count. Trout, Redfish. snook, shark, and several other species. I will post a pic when he sends them to me.read more

MATTHEW DAVIES
14:29 29 Jun 17
Best fishing charter in all of Florida and I have been on 100s all over the state. All of the... reviews I have read about this captain are true. One of the most enjoyable fishing trips I have been on. The Captain is the funniest and most knowledgable guides I have met.read more

Clint Killingsworth
15:18 17 Jun 17
Great day on the water with a great captain! Captain Dave Perkins and his first mate ( his cute... little dog) we're ready and waiting for our arrival just after 7:30 AM. He was patient with our kids...and us while trying to help us earn a memorable Keys experience. He succeeded and then some. Within a few short hours we landed 4 sharks and got our fill of sea trout and lady fish. He even gave a tour of some of the most beautiful scenery to boot. Top off your Keys experience with Captain Dave. You won't regret it.read more

Collin Fountain
18:33 17 May 16
I had an awesome time with Captain Dave. We caught trout, redfish, sharks, barracuda, snapper, and... ladyfish. Lost count of all the fish we caught. Great experience and can't wait to get backread more
Next Reviews