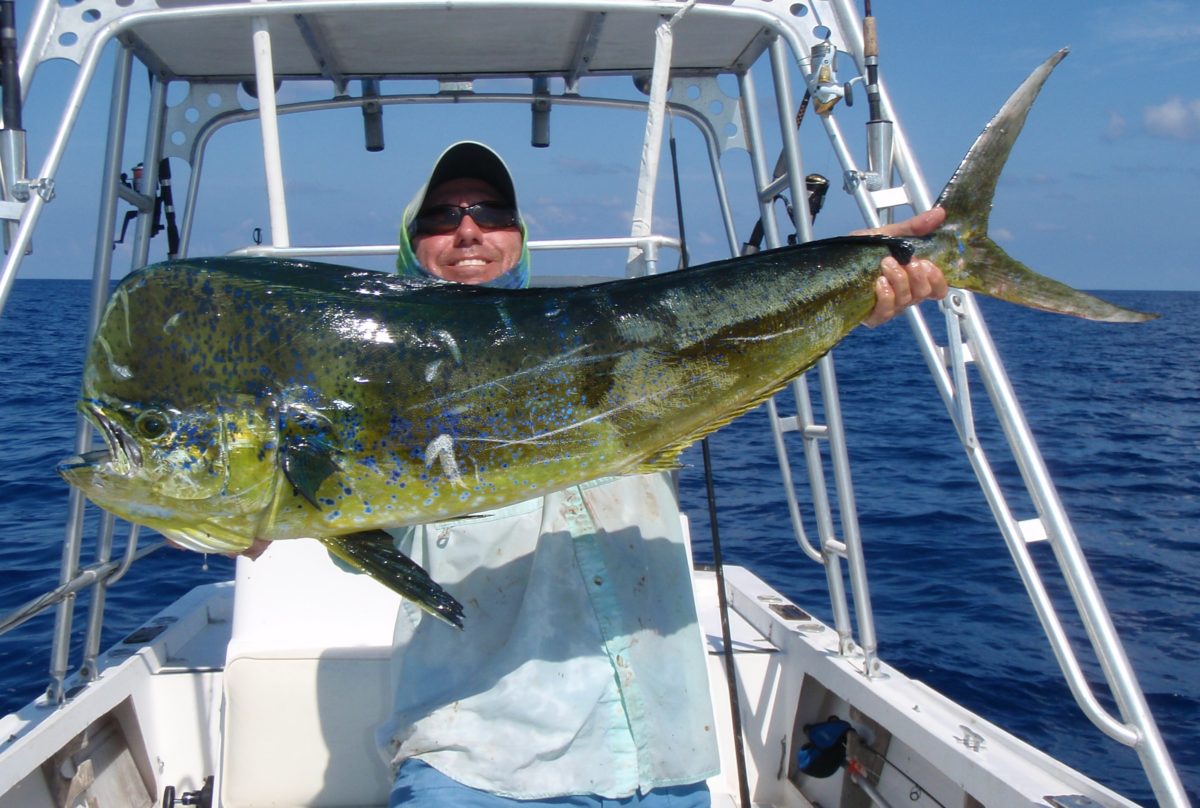 Let’s face it, fishing and photography are a sport and hobby that go hand in hand like NASACAR and beer drinking. Anyone can tell a fish story, but being able to show a photo of your catch to friends and family is a big part of the fun. It’s also a great way to prove that the whopper was in fact, the fish you caught, not the story you told. It’s also nice to have a keepsake of the day you had, the fish you landed and the people you shared the experience with.

As in any other pursuit in life, people have predispositions toward excelling in one area or another. Some people have “an eye for” taking good photos. Composition is a skill that can be learned and studied in a class, but it does come to some people easier than others. I know plenty of people who can fish up a storm. I know others who take fantastic photos. People who can do both well are harder to find. Learning to become a good fisherman can take years of experience, patience and hard work. Becoming good fish picture taker however, can be a lot easier.

I am going to discuss some basic concepts that will help you on your way. Some of the most important and easily identifiable aspects of a good fish photo are; focus, lighting, aspect of the photo, keeping everything “in” the picture (not cutting off the angler or the fish), freshness and location of the fish and finally, how the angler holds the fish. It may seem like a lot to remember, but in this day of digital photography where you can take multiple pictures of the same fish, and with some practice, there is no reason why every trophy fish you catch shouldn’t become a trophy photo.

Focus: The most basic and easily remedied aspect of fish picture taking is focus. Not aiming directly at the subject and waiting for your camera to “lock on” to it is a common problem. Take the time to be sure that it’s the subject you’re shooting that’s in focus, not the water or boat in the background. Be sure to hold the camera steady and have the angler keep the fish from moving. A rocking boat is another potential issue that needs to be taken into account. Finally, poor lighting is a common cause of blurred photos. If the there isn’t enough light for your camera to get a sharp focus, use a flash or tripod. You can even brace your camera on something to steady it if need be.

Lighting: One of the most overlooked concepts that make up a good fish picture is lighting. When you go to take a photo of a fish, the first thing you should do is to figure out where the sun is. Have the subject stand on the side of the boat with the sun on their faces or even turn the boat if you have to. Do NOT take a picture with the sun behind the angler. It will result in a silhouette and a dark face and fish. Save that type of picture for sunsets where a person is casting, fishing, drinking a beer or relaxing. Not holding up a black fish with a dark, expressionless face. 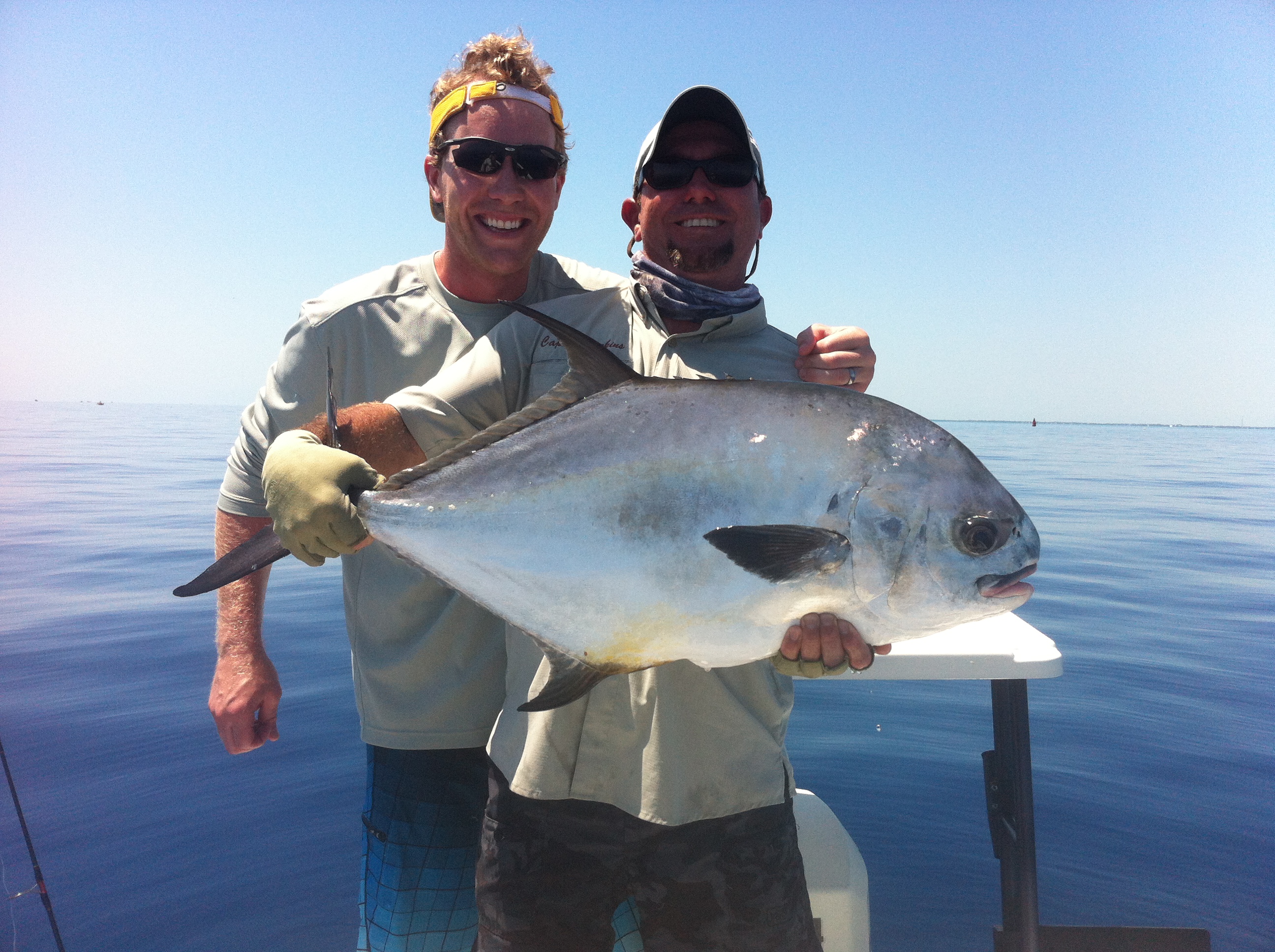 Aspect: Angle or aspect of the picture is very basic and simple. Be sure the horizon behind the angler is not sharply angled. While a bit of a tilt is one way to portray that the seas were rough or there was a lot of excitement when the picture was snapped, too much can cause disorientation for the viewer.

Keeping Everything In: A very simple mistake, which is so commonly overlooked, is not getting all of the fish in the picture. It is one of my biggest pet peeves and I will delete a photo rather than have to see a cut off fish. The only exception is in a fish selfie or a photo where the fish is still in the water.

Freshness and Location of the Fish: A basic rule is that the sooner after you boat a fish that you take a photo of it, the better it will come out. Many of the more beautiful fish like mahi and wahoo lose their coloring very soon after they are boated. While it can be a hassle to hold onto a flopping fish for a photograph, doing it right away will pay off in spades. Also, pictures taken on a boat are always more interesting and scenic than on land or a dock. Unless I want to document the entire day’s bag, I avoid dockside pictures when I can.

Holding the Fish: There is one aspect to a fish photo that will take trial and error, communication between the angler and the photographer and patience, and that is how to hold the fish. Unless the person in the picture is in great shape and wearing a bikini, the viewer’s attention will be on the fish being held up. Let them see it! Have the angler hold it out with a profile, with its best side showing to the camera. Be sure that the angler has the fish flat and doesn’t bow the fish’s body in so that it is concave. Try to avoid having blood, gaff wounds or seaweed on the side of the fish that is showing. Be sure they hold the fish without their fingers covering it if possible. This is especially true of small fish. Have the angler hold the fish right side up and either parallel to the horizon or straight up and down. Try to avoid odd angles. Finally, if the fish is to be released after the photo, avoid keeping it out of the water for too long and be sure to have them support the fish with their hands. Hanging a heavy fish straight up and down by its jaw can cause serious injury to the animal.

Keep these tips in mind the next time you take a fish photo and you are sure to come home with some great shots. Make sure your anglers smile for the picture! A bad day of fishing is usually better than a good day at work!

Adam Gray
20:26 03 Mar 20
Our trip with another captain was cancelled so I reached out to Captain Dave to see if he was available. He was able to get us out and put us on the fish in less than ideal conditions! We caught A TON of snook, trout, and jack. We even caught a jewfish. We had a blast and will definitely be booking another trip with him in the future.

Danny Ritter
01:47 22 Feb 20
I have chartered Captain Dave several times and it has always been a fantastic experience! Dave goes above and beyond expectations to provide the best fishing trip in the Keys that one can have. He is extremely knowledgeable, teaches you things, and assists when needed but lets you get the fishing done yourself too. Beyond that, Captain Dave is so fun and personable, and that is what really separates him from the competition. He’ll make you laugh, tell stories, listen to you, and really roll out the red carpet for his guests. You are guaranteed to have the best fishing charter experience in all of the Keys with Captain Dave!

Robin Berman
21:46 07 Feb 20
I recently fished with Captain Dave and I must say it was an incredible experience! I do not typically fish the backwater country, but after spending the day on the water with Dave, I fell in love with it. We caught numerous Snook, Redfish, Trout, etc. He certainly put us on the fish! Thank you Dave for an awesome day!

Wally Ermi
16:37 07 Feb 20
Dave is by far the best Captain out there. His personality coupled with the knowledge he has about the water made my trip truly memorable. If your looking to see all kinda of cool landscape, fish with a great Captain and most of all catch so many fish you will loose count, book a trip with Dave!

Joe Deily
15:09 16 Nov 19
This was my first charter with Captain Dave. Unreal experience. My wife and I were lucky to have calm waters in early November. Less than 90 minutes into the trip Captain Dave helped us catch our first Permit. He shared his knowledge of sight fishing, and made the trip a unique experience we will never forget.. What a beautiful fish! Clearly, he had a great understanding of the local area and where to get fish. In the latter part of the trip we caught redfish, snapper, jacks, and snook. He is easy-going, and made the experience extremely memorable, and tailored it to the conditions and our capabilities. We are novices, and we feel like we hit a hole in one.

Jay Forstner
23:07 05 Apr 19
Captain Dave is everything you could want in a fishing guide. He works hard. He's knowledgeable. He loves what he does. I had an all-day back country trip with Dave April 2. Minutes from the dock, he had us on fish, and he kept us on fish for the next eight hours. He knew the exact spot to target specific species, and if one spot wasn't producing, we moved on to the next one. Jacks, trout, snook, redfish, even a couple of unexpected monster sharks. He respected the fish and released them as quickly and humanely as possible. Just as important, he's a cool guy to be around. People sometimes forget that when you book a guide, you're going to spend the whole day in a boat with that person, so it's important that he or she is fun to be with. Dave is laid back, funny, interesting, and a good listener who seems genuinely interested in getting to know his clients a little bit during the day. He offered tips and advice on fishing techniques, but never made me feel like I was a complete novice, even though I was. All in all, just a great day with a fun, friendly guy who really knows his stuff. I recommend him very highly.

Dave C
21:43 06 Feb 19
We had an awesome back country trip with capt Dave. I highly recommend Dave. He put us on the fish and we caught more than I could count. Trout, Redfish. snook, shark, and several other species. I will post a pic when he sends them to me.

MATTHEW DAVIES
14:29 29 Jun 17
Best fishing charter in all of Florida and I have been on 100s all over the state. All of the reviews I have read about this captain are true. One of the most enjoyable fishing trips I have been on. The Captain is the funniest and most knowledgable guides I have met.

Clint Killingsworth
15:18 17 Jun 17
Great day on the water with a great captain! Captain Dave Perkins and his first mate ( his cute little dog) we're ready and waiting for our arrival just after 7:30 AM. He was patient with our kids...and us while trying to help us earn a memorable Keys experience. He succeeded and then some. Within a few short hours we landed 4 sharks and got our fill of sea trout and lady fish. He even gave a tour of some of the most beautiful scenery to boot. Top off your Keys experience with Captain Dave. You won't regret it.

Collin Fountain
18:33 17 May 16
I had an awesome time with Captain Dave. We caught trout, redfish, sharks, barracuda, snapper, and ladyfish. Lost count of all the fish we caught. Great experience and can't wait to get back
Next Reviews