A big grouper, an airplane, and a tale about one that did not get away. 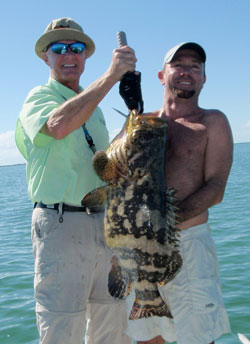 I fished a gorgeous day in Flamingo with anglers Gordy Johnson and Eugene Enlow recently. We eased up to a twin-engine plane wreck in the middle of the bay using the electric trolling motor. The plane was supposedly a drug runner that had been forced down by the DEA pilots one night in the late 80’s. It’s broken up now, but the wings and both engines are intact.

On some days it holds fish and can be very productive. I pitched a live pilchard next to it and handed the rod to Eugene. He hooked a goliath grouper immediately. It pulled like a freight train and despite his best efforts, the fish got into the wreck.

We could feel it struggling on the end of the line, so I knew it was still hooked and had not broken off. I wanted that fish! I told Eugene to hold the line firmly, but not too tightly. Luckily it was a calm, windless day so we stayed over the wreck and fish. I took off my sunglasses, shirt, shoes and hat. Gordy and Eugene looked at me as if I had lost my mind!

I said “I’m gonna at least TRY to get this fish.” I put on a mask and gloves and eased myself into the water. The water was crystal clear. (If it had been the least bit murky, I’d have never gone in it. Flamingo is loaded with big bull sharks)  I swam down to the wreck and I creeped up on it. The line was going right to one of the big airplane engines. 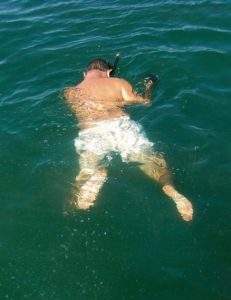 I peered into a space underneath it and did not see the grouper. I looked around the other side and there it was! It had gotten the leader wrapped around the propeller. It was all lit up and its colors were radiant. That’s a sign that a fish is agitated or angry. This occurs with many species of fish and anglers often call it “striped up”. I snuck around the backside of the big engine and grabbed the grouper by its bottom lip. It stared shaking and flapping violently. It was all I could do to hold on. I bear hugged him, pushed off of the bottom with my feet, snapped the leader and brought it up to the surface. 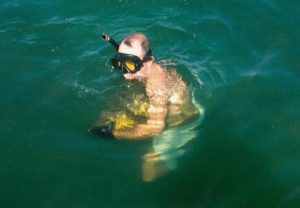 When I put my head out of the water, Eugene said, “Oh man, that’s too bad! It got off!” What a kick they got when I held up the grouper! Both of them were hooting and hollering and exclaiming that they had never seen anything like it. They couldn’t wait to tell the story to their friends back at the resort where they were staying! 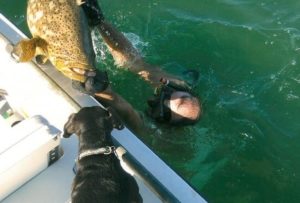 The fish was released unharmed after some good photos. When I took off my gloves, I saw that the grouper had left me a little parting gift to remember it by. Its teeth had penetrated my right glove and chomped my thumb. I’d have to say that I think it was worth it.

Christa Sedney
19:30 18 Mar 20
My 13 yr old son and I spent two days in the backcountry with Captain Dave Perkins (March 15th and... 17th, 2020). I can tell you, we will definitely plan a trip with him again! We had an amazing time! He was a very skilled guide, and pulled several tricks out of his bag to get us on the fish! In addition to landing several sea trout, snook and redfish, were fortunate enough to catch and release a lemon shark, spinner shark and sawfish!! They were beasts!!! This was an incredibly exhilarating experience and I couldn’t recommend Captain Dave more! So make the right choice and book yourself an excursion with him today!!! You won’t regret it!!read more

Eddie Sorrell
15:07 14 Mar 20
2 great days of fishing with Captain Dave March 3rd &5th Dave went out of his way to put me on a... back country game fish bite and it paid off 1st day we caught several reds/trout and snook second day out we got on a good snook/red fish bite and I landed 2 nice Snook.From beginner to experienced fisherman Dave is the man that gets it done we were blessed to be out there getting after it those 2 days I look forward to booking trips next yearread more

Adam Gray
20:26 03 Mar 20
Our trip with another captain was cancelled so I reached out to Captain Dave to see if he was... available. He was able to get us out and put us on the fish in less than ideal conditions! We caught A TON of snook, trout, and jack. We even caught a jewfish. We had a blast and will definitely be booking another trip with him in the future.read more

Danny Ritter
01:47 22 Feb 20
I have chartered Captain Dave several times and it has always been a fantastic experience! Dave... goes above and beyond expectations to provide the best fishing trip in the Keys that one can have. He is extremely knowledgeable, teaches you things, and assists when needed but lets you get the fishing done yourself too. Beyond that, Captain Dave is so fun and personable, and that is what really separates him from the competition. He’ll make you laugh, tell stories, listen to you, and really roll out the red carpet for his guests. You are guaranteed to have the best fishing charter experience in all of the Keys with Captain Dave!read more

Robin Berman
21:46 07 Feb 20
I recently fished with Captain Dave and I must say it was an incredible experience! I do not... typically fish the backwater country, but after spending the day on the water with Dave, I fell in love with it. We caught numerous Snook, Redfish, Trout, etc. He certainly put us on the fish! Thank you Dave for an awesome day!read more

Wally Ermi
16:37 07 Feb 20
Dave is by far the best Captain out there. His personality coupled with the knowledge he has about... the water made my trip truly memorable. If your looking to see all kinda of cool landscape, fish with a great Captain and most of all catch so many fish you will loose count, book a trip with Dave!read more

Joe Deily
15:09 16 Nov 19
This was my first charter with Captain Dave. Unreal experience. My wife and I were lucky to have... calm waters in early November. Less than 90 minutes into the trip Captain Dave helped us catch our first Permit. He shared his knowledge of sight fishing, and made the trip a unique experience we will never forget.. What a beautiful fish! Clearly, he had a great understanding of the local area and where to get fish. In the latter part of the trip we caught redfish, snapper, jacks, and snook. He is easy-going, and made the experience extremely memorable, and tailored it to the conditions and our capabilities. We are novices, and we feel like we hit a hole in one.read more

Jay Forstner
23:07 05 Apr 19
Captain Dave is everything you could want in a fishing guide. He works hard. He's knowledgeable. He... loves what he does. I had an all-day back country trip with Dave April 2. Minutes from the dock, he had us on fish, and he kept us on fish for the next eight hours. He knew the exact spot to target specific species, and if one spot wasn't producing, we moved on to the next one. Jacks, trout, snook, redfish, even a couple of unexpected monster sharks. He respected the fish and released them as quickly and humanely as possible. Just as important, he's a cool guy to be around. People sometimes forget that when you book a guide, you're going to spend the whole day in a boat with that person, so it's important that he or she is fun to be with. Dave is laid back, funny, interesting, and a good listener who seems genuinely interested in getting to know his clients a little bit during the day. He offered tips and advice on fishing techniques, but never made me feel like I was a complete novice, even though I was. All in all, just a great day with a fun, friendly guy who really knows his stuff. I recommend him very highly.read more

Dave C
21:43 06 Feb 19
We had an awesome back country trip with capt Dave. I highly recommend Dave. He put us on the fish... and we caught more than I could count. Trout, Redfish. snook, shark, and several other species. I will post a pic when he sends them to me.read more

MATTHEW DAVIES
14:29 29 Jun 17
Best fishing charter in all of Florida and I have been on 100s all over the state. All of the... reviews I have read about this captain are true. One of the most enjoyable fishing trips I have been on. The Captain is the funniest and most knowledgable guides I have met.read more

Clint Killingsworth
15:18 17 Jun 17
Great day on the water with a great captain! Captain Dave Perkins and his first mate ( his cute... little dog) we're ready and waiting for our arrival just after 7:30 AM. He was patient with our kids...and us while trying to help us earn a memorable Keys experience. He succeeded and then some. Within a few short hours we landed 4 sharks and got our fill of sea trout and lady fish. He even gave a tour of some of the most beautiful scenery to boot. Top off your Keys experience with Captain Dave. You won't regret it.read more

Collin Fountain
18:33 17 May 16
I had an awesome time with Captain Dave. We caught trout, redfish, sharks, barracuda, snapper, and... ladyfish. Lost count of all the fish we caught. Great experience and can't wait to get backread more
Next Reviews