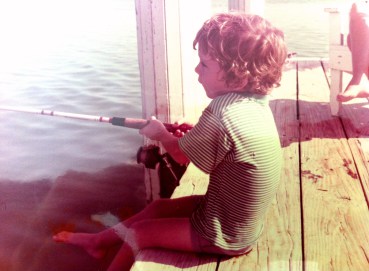 My father and I have been fishing in South Florida together for as long as I can remember.  His father fished with him from an early age as well. Their front yard was the beach in Tela, Honduras. Some of my father’s favorite memories were when they used to wake up, grab their rods, walk down the beach and spend a couple hours in the early morning snook fishing. Often they’d catch beautiful, trophy snook surfcasting with homemade bucktail jigs. Upon bringing the fish home, their cook would clean the fish and put it in the ice box. Father and son would wash up and head off to work/school.  That night’s family meal was fresh snook prepared to perfection for them. (It was a rough life, right Dad?)

I was born and raised in Miami. There were a lot of opportunities to fish in South Florida and my father took me every chance he could. I made friends at school and in the neighborhood and some of their dads had raised them fishing as well. My father’s father had left Honduras and retired to Sarasota by then. He still loved to fish and sometimes I was lucky enough to fish with him. He was one of the best fishermen I ever knew. Every year on his birthday he would walk from his house down to the water and catch a snook. Even into his late 80s.

Over the years I’ve accumulated some really great father-son fishing clients. I especially enjoy taking these trips because they are such a great setting for bonding and I get to be part of some very special moments that will be cherished for life. One of my favorite pairs is Mark Charley and his 12 year old son, Michael. I have been taking them out several times a year for four years now. We haven’t missed Michael’s birthday rain or shine. They have a have a great relationship and the love between them is palpable. Mark has mastered the balance between stern, respected and revered father with buddy, best friend and confidant. From what I’ve seen, those types of relationships don’t just happen. They take a lot of hard work, love and discipline.

Humorous banter has always been one of my favorite dynamics of any relationship, but I think it is especially important between family members. Mine is no exception and neither is the Charley’s. They are a lot of fun to be around. As with most father and sons, there is a healthy level of competitiveness there. Like many anglers, they keep track of who’s caught the most fish and who is “winning” at any given moment. I do it myself with some of my fishing buds. (And completely avoid it with others)

One morning a year or so ago, Michael showed up to the boat with a list of fish and corresponding numbers. At first I thought it was a projection of that day’s catch and I was horrified.  I’m a big believer of Murphy’s Law. You should never brag about fish that you’re ‘going’ to catch. It’s a sure way to get skunked.  It turns out that it was not a projection, but a fish point tallying system (I was okay with that). He had just taken our fishing to another level.

Each fish is assigned specified points. The more desirable or hard to catch the species, the more points it is assigned. Some fish have three point assignments; under legal sized, legal or slot sized and over slot sized. An example would be the redfish. A redfish has to be at least 18” to keep. It also must be less than 27” to keep. That means a “slot” redfish must be between 18” and 27” to take home and eat. So in Michael’s point system any redfish caught earns 2 points. A redfish between 18” and 27” earns 3 points and a redfish over 27” earns 4 points.

A catch means pulling the fish to the boat, out of the water or reeling the leader up the rod tip. Jumping a fish off or having it spit your hook out of its mouth while it is airborne does not count as a catch. (Sorry Michael) There are also species that actually count against an angler. They are considered undesirable or “garbage” fish. They are the lizard fish, catfish, boxfish or toadfish. Each one is worth -1 point. The angler may take their time reeling in these fish in an attempt to lose them, but once it is at the boat, out of the water or the leader is in the rod tip, the point is deducted.

We had a blast on our most recent outing this past week. The competition was fierce, but friendly. We were neck and neck for a while, but slowly but surely Mark pulled away with the lead and would not be caught.  The day’s end tally had Mark with 72 points, Michael with 48 points and Captain Dave with 30 points. The categories counted were trout, over 18” trout, jack, lady fish, over slot redfish, bluefish, snapper, pinfish, lizardfish and catfish. We had a break off of a snook and a shark which count for nothing, but are worth mentioning. Aside from the fish caught were a lot of laughs, a gorgeous glass-calm day, pod after pod of beautiful playing, feeding and mating porpoise, a big shark, a dozen tailing redfish, a loggerhead turtle and we even ran into a couple of good friends out on the water. Overall it was an awesome day and we all went home winners!

Adam Gray
20:26 03 Mar 20
Our trip with another captain was cancelled so I reached out to Captain Dave to see if he was available. He was able to get us out and put us on the fish in less than ideal conditions! We caught A TON of snook, trout, and jack. We even caught a jewfish. We had a blast and will definitely be booking another trip with him in the future.

Danny Ritter
01:47 22 Feb 20
I have chartered Captain Dave several times and it has always been a fantastic experience! Dave goes above and beyond expectations to provide the best fishing trip in the Keys that one can have. He is extremely knowledgeable, teaches you things, and assists when needed but lets you get the fishing done yourself too. Beyond that, Captain Dave is so fun and personable, and that is what really separates him from the competition. He’ll make you laugh, tell stories, listen to you, and really roll out the red carpet for his guests. You are guaranteed to have the best fishing charter experience in all of the Keys with Captain Dave!

Robin Berman
21:46 07 Feb 20
I recently fished with Captain Dave and I must say it was an incredible experience! I do not typically fish the backwater country, but after spending the day on the water with Dave, I fell in love with it. We caught numerous Snook, Redfish, Trout, etc. He certainly put us on the fish! Thank you Dave for an awesome day!

Wally Ermi
16:37 07 Feb 20
Dave is by far the best Captain out there. His personality coupled with the knowledge he has about the water made my trip truly memorable. If your looking to see all kinda of cool landscape, fish with a great Captain and most of all catch so many fish you will loose count, book a trip with Dave!

Joe Deily
15:09 16 Nov 19
This was my first charter with Captain Dave. Unreal experience. My wife and I were lucky to have calm waters in early November. Less than 90 minutes into the trip Captain Dave helped us catch our first Permit. He shared his knowledge of sight fishing, and made the trip a unique experience we will never forget.. What a beautiful fish! Clearly, he had a great understanding of the local area and where to get fish. In the latter part of the trip we caught redfish, snapper, jacks, and snook. He is easy-going, and made the experience extremely memorable, and tailored it to the conditions and our capabilities. We are novices, and we feel like we hit a hole in one.

Jay Forstner
23:07 05 Apr 19
Captain Dave is everything you could want in a fishing guide. He works hard. He's knowledgeable. He loves what he does. I had an all-day back country trip with Dave April 2. Minutes from the dock, he had us on fish, and he kept us on fish for the next eight hours. He knew the exact spot to target specific species, and if one spot wasn't producing, we moved on to the next one. Jacks, trout, snook, redfish, even a couple of unexpected monster sharks. He respected the fish and released them as quickly and humanely as possible. Just as important, he's a cool guy to be around. People sometimes forget that when you book a guide, you're going to spend the whole day in a boat with that person, so it's important that he or she is fun to be with. Dave is laid back, funny, interesting, and a good listener who seems genuinely interested in getting to know his clients a little bit during the day. He offered tips and advice on fishing techniques, but never made me feel like I was a complete novice, even though I was. All in all, just a great day with a fun, friendly guy who really knows his stuff. I recommend him very highly.

Dave C
21:43 06 Feb 19
We had an awesome back country trip with capt Dave. I highly recommend Dave. He put us on the fish and we caught more than I could count. Trout, Redfish. snook, shark, and several other species. I will post a pic when he sends them to me.

MATTHEW DAVIES
14:29 29 Jun 17
Best fishing charter in all of Florida and I have been on 100s all over the state. All of the reviews I have read about this captain are true. One of the most enjoyable fishing trips I have been on. The Captain is the funniest and most knowledgable guides I have met.

Clint Killingsworth
15:18 17 Jun 17
Great day on the water with a great captain! Captain Dave Perkins and his first mate ( his cute little dog) we're ready and waiting for our arrival just after 7:30 AM. He was patient with our kids...and us while trying to help us earn a memorable Keys experience. He succeeded and then some. Within a few short hours we landed 4 sharks and got our fill of sea trout and lady fish. He even gave a tour of some of the most beautiful scenery to boot. Top off your Keys experience with Captain Dave. You won't regret it.

Collin Fountain
18:33 17 May 16
I had an awesome time with Captain Dave. We caught trout, redfish, sharks, barracuda, snapper, and ladyfish. Lost count of all the fish we caught. Great experience and can't wait to get back
Next Reviews